Last time, I looked at the ways you can think about form when writing about poetry, and we took a look at Ezra Pound’s short poem, In a Station of the Metro in order to say something about form there. Today, we’re taking a look at a poem that is literally an explosion on the page, Study No° X by Pierre Coupey. This poem was a GCSE Anthology poem of the past and it foxed the best.  It gives rise to some lovely discussions about form.

So, just to recap – what are we talking about when we talk about form anyway?

How it’s set out on the page; line length, syllables, rhythm (metre) rhyme, what words are on what line, number of lines, sonnet, couplets, three lines, quatrains, regularity of the number of lines in a verse/stanza, capitals (or lack of) main punctuation at the end of lines or stanzas (, . , .  / , , , . / ; : ; . )  phrase splits and the way the words fall on each line, which ideas are linked within the line or stanza and which are separate, caesura, enjambment.

So, looking at the freakish and fiendish Study No° X, I’m just going to start as I always do by looking for interesting stuff.

Now you’d be forgiven for thinking that this poem was ‘so interesting’ (yeah, I know that’s not the adjective you’re thinking of right now) that it’s be quite hard to narrow down but let’s have a go….

If you want practice instead of just reading my own blah blah waffle, before you read my bit, have a go at making a list of 10 or so interesting features of the form. Then look at mine; I bet we have more in common than you’d have thought.

13 things that I find interesting about the form:

Other stuff is starting to drift into structure (although the title is technically structure I’d say as well) so I’ll leave those for another day.

So, once I’ve looked at my crazy unseen poem, I then make a list of the weird things and oddities I want to get into writing about. In the exam, I’m going to go super-fast and really I only need a shortlist of 4 or 5 things about form that I might select 1 or 2 to write about.

Now, you know me. I’m a grade 6 girl at heart. Can’t select or narrow down for fear of betting on the wrong horse.

“What if I pick X, Y or Z and the examiner wanted us to write about D?”

And my solution, my lovely readers, is to try to write about ALL of them in the hopes that one of those thirteen horses will be a winner and will pay out with a grade 8 or 9.

Except… except if I do that, I’ll need approximately 7 hours to write my exam, just for the section on the unseen poem where I might want to write about form. Just as a guide, Teacher Me says that the exam is asking me to spend maximum of 45 minutes on the unseen poem. That means I have about 10 minutes to write about form. So unless I plan on speed-writing so hard that my hand ends up mangled and I have 6.5 hours of hand cramp afterwards, or unless I plan on describing 10 or so of those 13, it won’t be possible.

Yet so many Grade 5 and below students opt for the latter.

“I can see 10 things I could write about form. Therefore, I’m going to write about all of them in case 1 is right and 9 are wrong.”

You have to pick a horse to back. One.

But let me tell you a secret…

So how do I go about narrowing down, since describing ten things in ten minutes will only reward me with a very low mark?

When we look at form, we almost look at it as if it’s completely divorced from language and ideas. Except it’s not, is it? I want to think about the main idea in the poem – what’s it about? – and then pick out form aspects that relate to that.

That’s the really important bit for those of you like me who can spot 100 features and can’t pick one sensible one to write a paragraph about.

So what’s the big idea of this crazy poem?

I’m going to let you into another secret…

I really haven’t the foggiest.

Ok. Bit of an exaggeration. I can a bit. But it’s fairly nonsensical, so it’s simply my own idea about what the central idea is.

But how do I know what the central idea is?

Often, the form or the structure will help me find it.

It’s the bit of the poem where there are lots of unusual things going on with the form. Like that line in Wordsworth’s Stealing the Boat that is 11 syllables, not 10… that line that is arrived at by a massive and lengthy build-up to the “horizon’s utmost boundary” that can’t restrict itself to the syllabic metre.

Look for the confluence of simple language, important structural devices (like beginnings and ends, or shifts in mood) and aspects of form.

For Study No° X, that brings me neatly to “mother… love… Infanta! Madonna! Guernica! Hiroshima! hell, flesh and dust” and I notice that we kind of start with mother and love (“chi ama, crede” means “who loves, believes”) and stops at towns completely destroyed in war, then goes to “flesh and dust”) so I don’t think I’m going out on a limb or being too wacky if I suggest it’s about life, death and everything in between. Creation and destruction, maybe.

So then I start to think about what aspects of form support that. And do you know what? It seems like it’s about the whole ‘explosion’ of the poem on the page, centred on ‘Guernica and Hiroshima’ but when it gets down to it, I think the poet seems to be telling us it’s all pretty random, lawless and unstructured.

And isn’t that what the form is?

I’m going to do the same as I did last time – switch the timer on and write about the form of this poem. You’ll see me start descriptively and then move into analysis rooted in evidence.

If it’s not rooted in evidence, by the way, it’s just speculation. I could say this poem was about nuns and pussycats if I wanted, but that’s just unsupported, unjustified speculation.

So, let’s have a go… start off describing, like we did last time and then move into an explanation of how that works with the content of the poem.

Study No° X by Pierre Coupey looks literally like an explosion on the page: the conventional rules of poetry have been broken, and the words lie chaotically across the page. Given that there are two towns that were completely destroyed by bombs, Guernica and Hiroshima, lying at the centre of the poem, there is a sense that the words themselves echo the remnants of those two towns, depicting the destructive forces that can obliterate the normality of life, just like the way the poem contains remnants and fragments of something recognisable. Chaos certainly seems to be one of the central themes of the poem, and is clearly represented by the rule-less, unconventional form of the poem. Perhaps though, this also picks up on another theme, how the rule-less unconventional form represents how life doesn’t follow ordered lines. Despite that, there is a sense of a chronology in the structure – a beginning that seems almost to hint at conception, “just a cosmos of love” and an end, “flesh and dust” and in that way, the poem could be seen to represent Coupey’s view of life, how it may start and end in fairly conventional ways, but everything in the middle is less predictable. There is a reference at the epicentre of the poem to “Guernica” which is also a famous painting by Picasso, a semi-abstract painting about the bombing of the town. The painting represents the destructive forces of war and in that way, we can see Coupey, a painter himself, using semi-abstract poetry to create something that emerges from chaos, not unlike Picasso did with paint. Whilst the poem seems to run from “a cosmos of love, there are also many images of violence, “split pea skulls” where the way the words in this phrase are fragmented across three lines, almost reminding us how fragile the human skull is, that it can be split as simply as a pea. Ultimately, it is no doubt Coupey’s painter background that helps us make the most sense of this poem: like many abstract works of art, it is left to our imagination: we make sense of the chaos presented to us. Whether you see the references to love and courage, or to Guernica and Hiroshima, what you take from the poem is up to you.

As you can see, then, it’s perfectly possible to make sense of something more abstract and unusual. The orange bits are my description of what is going on, and then I’m just trying to explore how some of those things might relate to the big ideas within the poem.

Form should never be divorced from language.

You can see that you also don’t need to write unsupported speculation. Everything relates to evidence from the poem or from its context.

It did help me to know that the poet is also a painter, though, and to know a bit of his context and the context of some of those words. You wouldn’t have that in the exam. But then again, nobody is going to throw you a poem like this for your unseen poetry analysis, so you don’t have to worry too much. If you can make some sense of this poem, and some sense of In a Station of the Metro that we looked at last time, you’re doing fine. 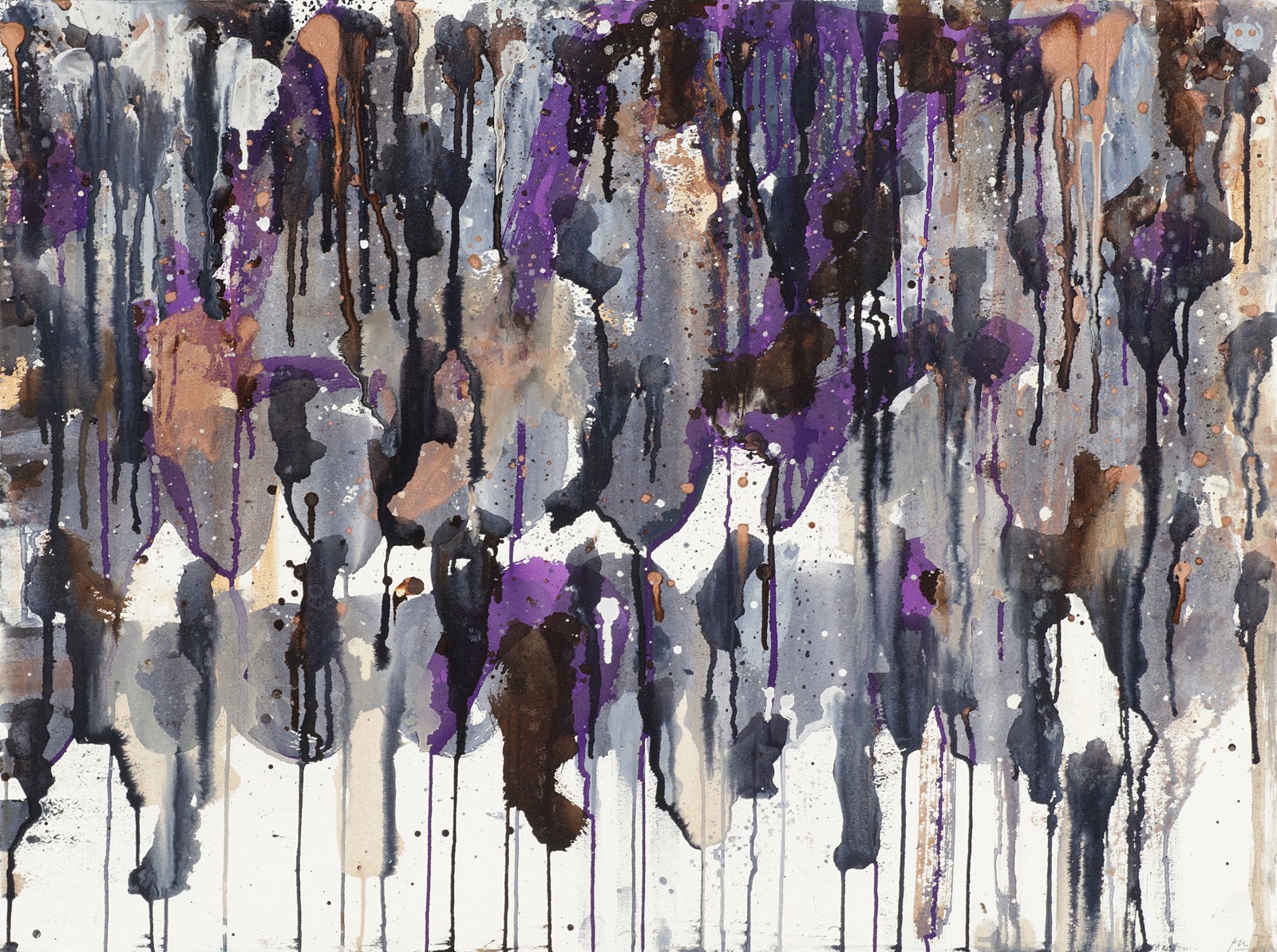 So don’t be afraid of poetry and don’t feel like you need to resort to cheap comments about how the poem ‘looks like’ something when you’re talking about its form. If you take Blake’s London as your baseline ‘rigid’ and conventional and Coupey’s Study No° X as your baseline ‘unconventional’, then you can look at every poem and decide how much it conforms to the rules, and what reasons the poet might have had to choose the form that they did.

And if you want to have a bit of practice, why not get in touch?

Poetry need not be frightening or hideous!